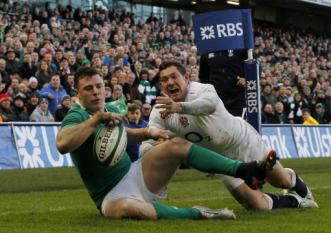 Ireland’s apparently unstoppable bandwagon recorded a perfect ten of ten straight wins, adding formidable England to their growing list of illustrious victims, which includes France [twice], Australia, and South Africa. Ireland appear to have forsaken a degree of flair in the immediate post-O’Driscoll dispensation, but they lack little in terms of graft, and the conquest of England was attributed to the home team’s superior ‘accuracy’.

Accuracy was the buzz word amongst the rugby commentariat after the skirmish. Usually one associates the need for accuracy with the likes of darts, golf, or snooker, whilst pace and power are often regarded as the priorities in rugger. Well, Ireland’s kicking game and cover tackling were of such a high standard that the word accurate seemed the most appropriate description. To be fair to the English, even the likes of Matt Dawson was heaping wholehearted praise upon Ireland’s industrious performance. It seems that Ireland are on course for a World Cup semi final [or better!] if they can maintain such heights in the autumn. Easier said than done perhaps?

The win over England owed as much to the now famed, meticulous planning of the obsessively analytical Joe Schmidt. Whereas some coaches are perhaps Mr Motivators who rally the troops and are liable to throw the crockery around during a half-time outburst, Joe is the studious type who scrutinises his team and the opposition, and then formulates the kind of game plan to achieve a positive result. Admittedly, Ireland’s try was ‘ugly’ and the team are not yet in Barbarians mode, but whilst they continue to construct their wall of defence, they will remain almost unbeatable. They clearly have three major factors in their favour. They are conceding few points, they execute their own chances, and they have a goal-kicker who is unrecognisable from the nervous Jonny Sexton who emerged onto the Six Nations scene several years ago.

In fact, it would be no exaggeration to state that not only is the Ireland team well-orchestrated by their conductor, the highly-rated Mr Schmidt, but the team itself is an orchestra, with each player bringing their own distinctive and important contribution to the unit. The scrum was more than competent against England, so kudos goes to the front row trinity. The line-out work of the second rows was equally effective. The flankers were putting in the big hits and carries. The half backs were kicking England all over the park and thereby running the show. The three quarters gave no quarter when the English backs asked questions of them. Then there was Rob Kearney being his usual dynamic self.

As a consequence Ireland have two away matches left to negotiate. A grand slam is on the cards, but the Welsh will be desperate to halt the Irish juggernaut. We can expect Warren Gatland to sneer at Ireland’s ‘kicking game’ and for the Welsh to delude everyone about their superior flair. The proof of the pudding will be in the eating, and if Ireland can keep the solid work going, then glory beckons later in March. With Ireland having conceded a puny total of 23 points in their first three outings [an average of about eight points to the opposition], then it only takes three or four successful penalty kicks from Sexton to guarantee victory. Unless Wales and Scotland can get into double figures, they can expect to lose to the rampant men in green.