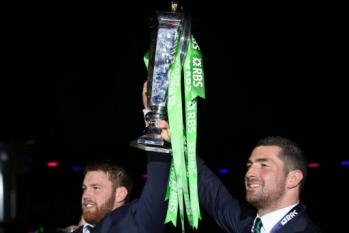 More Silverware! [photograph courtesy of Empics, via http://sugbynetwork.net]
For Ireland, Six Nations Championship glory is akin to the proverbial London buses – none for ages, and then two in quick succession. Mind you, what with the grand slam of 2009, the men in green have now won three six Nations tournaments in the last seven years, so clearly they must be doing something right! Guided by the extremely astute Joe Schmidt, the class of ’15 have even gone and emulated the vintage of ‘forty-nine by securing back-to-back Five Nations/Six Nations championships.

The Saturday finale proved to be heart attack central for the supporters of the three leading contestants. First of all, Wales looked out of the proceedings as they laboured to a one-point half-time lead in Italy, but then the hosts caved in after the interval, leaving Wales with a fighting chance of the top prize, and leaving the Oirish to curse the Italians’ capitulation.

However, in act two of the three-part drama, the Scots proved to be as equally fragile as the Italians had been. Ireland knew from the start that they needed to post some serious points, and that to do so would involve amassing a few tries along the way. Happily, the men in green hit the ground running on an afternoon when the conditions were ideal for running rugby. A line break from the outstanding Tommy Bowe propelled Ireland towards the Scottish whitewash, and sure enough the visitors soon helped themselves to seven points as Captain Fantastic barged over from short distance. By the ten minute mark, the away team had ten points, although it was totally unrealistic to expect the Irish to obtain an average of one point every minute! Eventually, the Scots decided to join in the hostilities and Finn Russell took advantage of the erratic Kearney’s inability to field a grubber kick. Russell had the presence of mind to journey round under the posts to leave Laidlaw with a simple conversion. For a brief while, it looked like the Scots would offer Ireland a challenging contest, but instead of reliving the heroics of Bannockburn, the tartan warriors produced a display more reminiscent of Culloden. It was uncharacteristic in the least to witness a Scotland team come up really short in the tackling department. The way that man of the match Sean O’Brien sailed to the line for the second Irish try, following a good line-out take from the giraffe Toner, was a case in point.

By the halfway stage, Ireland enjoyed a useful ten point adavantage, which was just about an adequate platform to play expansive rugby in the second half, safe in the knowledge that there was ample daylight between the two belligerents. In the event, it would have been beyond the Irish team’s wildest dreams that Scotland sportingly failed to register a single point in the second forty minutes, while Ireland doubled their tally. Jared Payne finished off a good scissors move, engineered by the enterprising Sexton to score his first try for ‘his country’ under the posts. It was perhaps just as well that the touchdown was under the posts as Jonny Sexton [flawless in the first half] reverted to erratic goalkicker in the second forty minutes. Even his replacement Ian Madigan missed a penalty, leaving the green contingent wondering if the missed kicks might come back to haunt them in the evening.

With Sean O’Brien collecting his second, converted try and his Leinster back-row teammate Jamie Heaslip producing his most important tackle ever on Hogg at the death to thwart a certain try, the Irish now were left crossing their fingers or hiding behind the sofa as John Bull bullishly set about the stiff target of overcoming the French to the tune of a 26-point margin.

“Ce n’est pas possible”, said me, but the French defending was shambolic, and the English [bless them] came within inches of pulling off the mother of all rugby triumphs. In the event they outscored France by the extraordinary fifty-five points to 35. Incroyable. Both teams had contributed ninety points to the final showdown. Unfortunately every time that the French scored, they seemed to concede immediately, as the English refused to accept their fate. I kept thinking that all the French needed to do was to consolidate, keep possession for ten minutes or at least put in a good shift of solid defending, but seemingly such basics were beyond them. Crucially, England were landing all their conversions from all corners of Twickenham, while the once-reliable French goal-kicking department chose this occasion, of all times, to take the day off. Trust France to almost sabotage Ireland’s Six Nations hopes yet again, and to do so without even bloody playing against them at the time!

Well, it all proved to be a happy ending for the Irish supporters who had stayed behind at Murrayfield to salute their heroes, as Paul O’Connell and his colleagues collected the Six Nations trophy for a second successive year. In truth, the final table doesn’t lie. There is little, if nothing, to choose between England, Ireland, and Wales. However, the powers that be have decreed that it is no longer sufficient for teams to share the top prize, so the points difference must determine who takes the gold medal, and lo and behold the Irish did just enough to grab the silverware.

Clearly, the Six Nations success bodes well for Ireland [and England and Wales] ahead of the 2015 World Cup this autumn. It was a timely reminder in Edinburgh that Ireland can profit from running rugby, and they did tick that box, albeit against an impotent Scottish defence. It was also a good news story that Sean O’Brien should emerge as the final day hero with a brace of tries. He missed all of last season’s tournament and got injured immediately before the first skirmish against Italy, so to finish the proceedings with a couple of touchdowns vindicated his long trek back to full recovery. He even had the dignity to accept his tries with modest celebrations unlike Ben Youngs and a few other English and Welsh drama queens who prefer to punch the ball into the crowd and behave like they’ve just won the lottery. Oh well, European rugby’s lottery was won yet again by the Irish. They came mighty close to a third grand slam, but another championship will do just fine instead. Bravo!