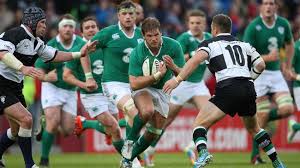 Ireland were beaten by 1 point for the 3rd time by the BaaBaas on Thursday evening in Limerick. Not even a late last gasp try from Paddy Jackson and an incredible drop goal conversion from Madigan were enough to save Ireland.

The BaaBaas scrum was very poor, they were handing Ireland penalties on a plate in the first half. Ireland failed to exploit these opportunities. Prop Roberto Tejerizo was sin binned for repeatedly causing scrum infringements at the end of the first half.

This was not the only yellow we saw. Jack McGrath could have been looking at disciplinary action for kneeing Barbarians lock Konstantin Mikautadze in the back. The offence earned him a yellow card and I can’t imagine Schmidt was pleased with what he saw. It’s unfortunate as McGrath has had a very good year with Ireland, but it was annoyingly stupid to do that leading into the World Cup. Madigan was also seen in the same footage to have made contact with Mikautadze’s back using his boot, that kind of play is hard watching for me I must say. It’s not acceptable as a supporter to see players you have a lot of respect for conducting themselves in such a manner on the pitch. Schmidt will definitely be having words. They may count themselves lucky as neither were cited for the incidents.

England’s Dylan Hartley was not so lucky, Lancaster dropped him from the training squad after he received a 4 week ban for headbutting Saracens’ Jamie George who ironically has actually replaced him in the squad.

The defensive play from the BaaBaas was unusual but was actually quite good at times. They managed to keep Ireland at bay for large periods of time. That said, they looked very dangerous on the attack with welsh winger Alex Cuthbert scoring 2 tries using a combination of his pace and 16 stone in weight to break down the Irish defence.

Leinster supporters will be jealous of the way Kirchner played, I haven’t seen him play like he did in Limerick at all for Leinster this year. He was exciting and clever with the ball in hand. An incredible solo try left us all a bit shocked.

Gilroy replied with a lovely try after a pass from Reddan, using the quick feet that earned him the title of top try scorer in the Pro12 this year, he dived over the line to score.

Colm O’Shea, young blood with only 4 Leinster caps, struggled to impose himself but produced a solid debut against a very experienced side.

Chris Henry still brings a smile to my face when I see him play, after going through heart surgery and suffering a mini-stroke, there were serious doubts over whether or not he would ever play in the green jersey again. Pretty impressive and testament to the man himself for persevering and proving us all wrong. He even managed to get over the line for a try in the second half against the Barbarians.

Gilroy, O’Shea and Strauss were probably the best performers on the night in my opinion.

What positives can we take from this somewhat disappointing performance? Ian Madigan played well in 10 and is getting much needed game time, I think he has proved himself as 2nd choice outhalf behind Sexton. Chris Henry is fighting fit, has played well for Ulster this season and played an important role in the 2014 6 Nations Championship, so perhaps Schmidt will look to include him in Ireland’s training squad this summer.

The negatives I think are evident, Ireland struggled without the likes of Paul O’Connell and Conor Murray. The lack of Munster players in this starting XV had a huge effect of the game, and to be honest I can’t see Ireland winning a World Cup without those two. A number of Irish internationals are in race to be fit in time for the warm up matches against Wales and Scotland, Healy, Fitzgerald and Cronin are all out for lengthy periods.

Congratulations to Shane Jennings on ending a fantastic career by leading the Barbarians to a win in Limerick. #ThanksJenno