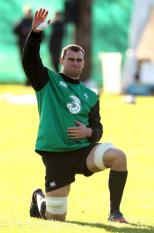 The silverware just keeps on coming for the Oirish contingent, as the Emerging Ireland team helped themselves to the 2015 World Rugby Tibilisi Cup. Okay, so the quality of the opposition wasn’t exactly drawn from the elite of international rugby, but the men in green, to coin the old adage, could only beat what was placed in front of them, and beat them all, they did. In the event, the Irish took a maximum of fifteen points from their three outings, including a bonus point in each win. They were thus able to finish atop the four-team table, seven points ahead of the runners up, ‘Emerging Italy’. The results and final table are as follows:

The fly half JJ Hanrahan presented Emerging Ireland with an early lead, courtesy of an accurate penalty kick. The outside centre Eoin Griffin scored the first try, with less than a quarter of an hour played. The right winger, Andrew Conway added a second ten minutes later. Hanrahan missed both conversion attempts, but he was successful with his third conversion attempt, following Stuart McCloskey’s try. Half an hour had not yet elapsed, and both Irish centres had scored tries, as the green warriors amassed a healthy twenty points to nil lead. This remained the score until the dying seconds when the full back Tiernan O’Halloran ensured a bonus point triumph by collecting the team’s fourth try, which was also unconverted by Hanrahan. Rhys Ruddock was the team captain.

Georgia then beat Uruguay narrowly by nineteen points to ten, at the same venue, immediately afterwards. Both teams scored one converted try each.

With a gap of only four days between matches, the Irish not surprisingly rotated their squad to ensure sufficient freshness amongst the troops. Andrew Conway, this time playing on the left wing, opened the tries account inside five minutes, with fly half Rory Scannell adding the two point extras. Scannell’s half back partner, John Cooney, doubled the tries tally with barely ten minutes played. This time, Scannell failed to convert. Right wing Cian Kelleher took the tries count to three inside the first fifteen minutes, with Scannell doubling his points total. On the stroke of half time, Scannell converted a penalty try to provide his team with an unbreachable interval lead of 26 points to nil. Uruguay finally opened their account, with a converted penalty try of their own, with less than ten minutes remaining. However, the Irish had the last say, as Scannell converted a try from the second row replacement Ben Marshall.

Italy then defeated the host nation by 26 points to ten, also at the same arena, in the subsequent contest, outscoring their opponents by two converted tries to one.

On the Sunday, the Italians made it two out of three when they conquered Uruguay 23 points to thirteen, again recording two converted tries and conceding one.

The lock forward Billy Holland captained the Irish, in place of the injured Ruddock, but Holland himself had to depart the proceedings inside the first ten minutes. The home team took a surprise early lead, thanks to an unconverted try by Lomidze. A Hanrahan penalty reduced the arrears, but Georgia grimly held on to their lead up to the end of the first half hour. Then, Hanrahan converted another penalty try, enabling his team to lead unconvincingly by ten points to five at the halfway stage. Unlike the first two Irish matches, an avalanche of tries arrived in the second half, including a penalty try for the Georgians which briefly stemmed the Irish rampage. However, the visitors let their hair down, as JJ converted tries from Ruddocks’s stand-in, Eoghan Masterson, Andrew Conway (again), and the front row replacement Finlay Bealham. The left wing Matt Healy bagged a brace of tries in the second half rout.

The coach, Allen Clarke, ought to be reasonably satisfied with the results. Unfortunately when you are confronted with lesser opponents, then you’re on a hiding to nothing, as a defeat would be greeted with howls of derision, and a triumph would be met in some circles with an apathetic shrug of the shoulders. However, this was a good opportunity to blood and bond possible grand slam and triple crown heroes of the future. Perhaps special mention should be granted to Andrew Conway who landed a try in each match, while Leinster number eight Jack Conan, Ulster hooker Rob Herring and Leinster back Noel Reid were sufficiently impressive to merit call-ups to the 45-man World Cup training squad.

FINAL STANDINGS [from three matches each]: