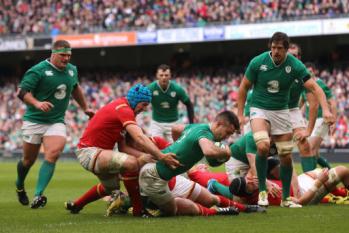 Neither Ireland nor Wales were overjoyed at having to settle for a solitary point, but in truth neither team quite did enough to merit a win. As a consequence, it is a case of glass half full and/or glass half empty, as both these rivals have lost any chance of a 2016 grand slam or triple crown, but given the precarious nature of such a close contest, each team can also be thankful that they salvaged a draw, when a defeat was a real possibility.

This was surely Wales’s big opportunity to secure back-to-back Six Nations triumphs against the Oirish, when one considers the departure of the old talismen of O’Connell and O’Driscoll, not to mention the absence of the likes of Rob Kearney, Sean O’Brien, Peter O’Mahony, Iain Henderson, and Tommy Bowe.

However, both teams are nothing if not resilient, and an Irish team almost unrecognisable from that which had played previously against Argentina tore into their visitors in the opening half hour, resulting in a deserved try for the enterprising Murray. Admittedly an almost second string Irish pack was creaking at the scrum, but otherwise the Welsh could have been forgiven for fearing the worst, as they have been soundly beaten several times in Dublin over the last dozen years. However, as they demonstrated famously against England in the Rugby World Cup, the Welsh don’t know when they are beaten, and they breathed life into the contest in the last ten minutes of the first half, culminating in a try for big Faletau.

The hosts must have been miffed to be merely three points ahead at the halfway stage, but worse was to follow, as first Wales negated the lead and then proceeded into a three-point cushion of their own in the last ten minutes, only for a moment of stupidity which handed the advantage away again almost instantly, enabling Sexton to restore parity. A draw was a fair result, but it suits neither protagonist. They are already playing second fiddle to England. What few will have realised with this draw is that if a couple of teams have an odd number of points going into the final Saturday, we will be denied a repeat of last year’s battle to see who racks up the most points on the last weekend. It’s likely that the championship will not be settled by which team has a better points differential, unless of course Ireland and Wales are tied for top position in March.

Meanwhile, Ireland have the short turnaround of six days against the French. It is a case of the old cliche of which France team will turn up on the day. They laboured to a home win against Italia but then all teams can be forgiven first weekend rustiness. Ireland do seem to have France’s number of late, so they shouldn’t fear the trip to Paris. Besides, the occasional Irish success in recent years against French teams in the European Cup has demolished the fear factor of visiting France. O’Brien should be fit to return. He will be a straight swap for the unlucky O’Donnell who may well have suffered concussion anyhow. O’Donnell and fellow Munster flanker the debutant CJ Stander had fine outings. The latter was deservedly nominated as man of the match. He looks a great prospect. We are blessed with several very good back row forwards now. When they are all fit, if that ever happens, coach Schmidt will be presented with a nice selection dilemma. One would have to say that Heaslip may eventually have to make way at number eight for Stander, with O’Brien and O’Mahony or Henry occupying the wing forward berths, closely followed by O’Donnell and Ruddock in the pecking order.