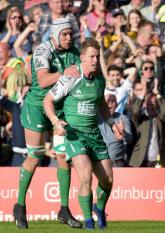 Well, well, well, who would have believed it possible? Little old Connacht have deservedly become the champions of Ireland/Scotland/Wales after comprehensively dismantling mighty Leinster on Saturday past at Murrayfield, outscoring the giants from the east by three tries to one. This is surely British and Irish rugby’s equivalent of Leicester City winning the soccer English Premiership. For more years than they care to remember, the plucky west coast bunch have been little more than gallant losers and frequently a long-suffering punchbag for their neighbours to the north, east and south. However, coach Pat Lam has masterminded a remarkable season, ably assisted by a talented squad that have reached the heights. It’s a pity for them that the highly-rated Robbie Henshaw is moving on, but the flying duo of winger Matt Healy and full back Tiernan O’Halloran will be sticking around, as Connacht prepare to defend their PRO12 success of 2016. No this is not a misprint!

CONNACHT try-scorers: O’Halloran, Adeolokun, Healy (one of the tries was converted by MacGinty)

Take a bow, the following heroes: