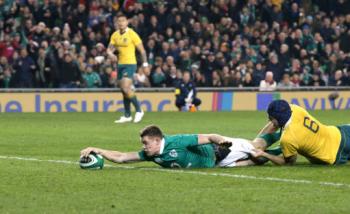 A very makeshift Ireland back division saw off a determined Australian comeback on Saturday evening, ensuring an unprecedented hat trick of southern hemisphere scalps in the same calendar year for high-flying Ireland. Unbeaten England fully deserve to start the Six Nations as tournament champions, but recent form points to a grand slam decider in Dublin’s fair city in mid March in the final fixture of the competition.

Ireland eventually stormed into a seventeen points advantage, courtesy of tries for big Henderson and the promising Ringrose, both converted by the very accurate Jackson. However, the hosts uncharacteristically lost one of their own scrums crucially just before half time and the Wallabies took full advantage, as they raced up the field and scored under the posts.

A ten points lead at halfway seemed inadequate reward for Ireland’s endeavours, but worse was to follow. The Wallabies predictably bounced back, as only they can, and transformed a seventeen points deficit into a twenty points to seventeen lead. Would injury-stricken Ireland capitulate? Fortunately no. The home team found another gear and delivered the winning score when Keith Earls was put over in the corner. The icing on the cake was then a tremendous touchline conversion from Paddy Jackson from the right. Thereafter, the Oirish were required to dig deep and hold on to their slender lead, which they duly managed.

This was a perfect result for the captain Rory Best, who was playing in his one hundredth match for Ireland. He will be hoping that four or five northern hemisphere scalps can be accumulated in February and March. It seems to be a definite possibility.